THERE IS LIFE AFTER PRINTING

Posted on 5 November, 2012 by maferarenas 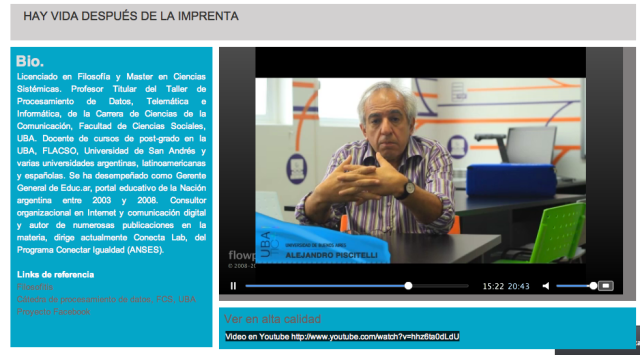 At the beginning of the 1st Meeting of TICS Virtual and teaching at the highest level UBA # UBATIC, I attended the virtual presentation [see video on YouTube http://www.youtube.com/watch?v=hhz6ta0dLdU] bearing the title of this post by Alejandro Piscitelli – philosopher and specialist in Internet and digital media, university lecturer and author of several books and articles. In this video,  Alejandro exposes his concerns and experiences on the current scenario of teaching practices in the upper level ( in Argentina) reviewing theoretical notions (Piaget’s pedagogy of Paulo Freire, Lacan, structuralism, intelligence colectivaentre other), authors (Sherry Turkle, Michel Foucault, Jacques Derrida, Robert Putnam with Boiling Alone, among others) and collective learning environments (those created in Moodle, or experiences: COURSERA, OPNEN MIT courseware, etc …). Alejandro also invites new ways to think and perceptual horizons referred to the passage in the book culture to digital culture. Its premise is very interesting, and I recommend him fully because each may draw their own senses and questions.

In this regard, I am interested to highlight some issues and problems that are referred to the redefinition of the meaning of “education” that challenge cognitive monopolies. In particularly, in relation to the academy university (as traditional institution) to technological upgrading Internet (1st Revolution: writing, printing the 2nd, 3rd Internet):

Alejandro ´s speech is interesting because it recovers debates and perspectives that open new horizons of thought to scenarios in which open knowledge, collaborative participation, collective decisions, social interests will permeate the sense of learning and experiences training and development for life. As quoted Alejandro Piscitelli, you can “pour mieux sauter reculer” (go back before the leap forward thimble) to, as does the American writer and anthropologist and ethnographer first communication Sherry Turkle in education who has the courage to review and critically questioned after a decade starting their grievances in his latest book – review, step back and see with a new perspective and future scenarios.

FUTURE: Is there life in the next stage of formal education?

In this regard, I find it interesting to connect the issues above exposed to those raised by Anka Mulder (*) who show possible answers in relation to the monopoly of knowledge in academic areas. These arguments are cited in the article by D. D. Guttenplan entitled “Open Resources: Knowledge Is Transforming the Way Spread, New York Times.

(*) Anka Mulder is Secretary General of the Technical University of Delft (UK) and made this presentation at the “Open Education Week,” an event held in early March (2012) on the campus of the University of California, Irvine, and the Massachusetts Institute of Technology at the University of Cape Town, Leeds Metropolitan University in England, and the National Science Library in Beijing. I am interested in his approach and referred to the problems of the universities that are experiencing this “cognitive restructuring” to “open knowledge” within their educational walls.

Mudler highlights the importance of open resources and mentions five issues to be reviewing at universities:

-Teaching
-Space for social interaction and knowledge of students
Test-supply feedback in the form of ratings;
-How to maintain institutional reputation (being a good place to learn)
-How to certify what graduates know through accreditation

-There is a kind of skepticism about the tendency to move content online;
-Economic issues is a barrier to the growth of open source;
-Completion rates of students in purely online programs are very low.
-The organizational-educational and research have to adjust their digitalization processes, management and reuse of knowledge objects to the extent that the process can become routine and less exepansive.
-Teachers and researchers will have to achieve a paradigm leap in the ability to acquire, assimilate, exchange knowledge.

1) Maintain an open and widely accessible network worldwide.
2) Having the most powerful tools for knowledge extraction, which complies with “open” standard for data format and communication protocols.
3) Propose viable plans law to protect authorship.

• Foster the study of new technologies and methodologies for knowledge production simple, accessible and reusable, with special attention to issues of localization (translation).
• Encourage pioneering experiments, highlighting success stories and best practices.
• The establishment of a board of experts to gather, evaluate and maintain a repository of available technologies of open source software for creating and using knowledge objects and sessions management e-learning, also producing relevant documentation as necessary.
• Establishment of a Standing Committee and open to make the best ‘open’ licensing agreements for digital content, with particular attention to the international legislation
• A regional and inter-annual conference to disseminate achievements.

We could consider that the future scenario of the learning, as Alejandro Piscitelli said in the text quoted above, is to overcome the dualisms (a better to learning with or without ICTs) and polarized positions. Knowledge sharing is a fundamental condition of collaborative research and teaching and learning. In that sense openness to collaborative resources should be considered, also suggestions Ana Mudler-to enable the exchange of research and knowledge as well as their dissemination so as to facilitate their access by interested persons and that needed.

In my opinion, this process will be accompanied by a new media ecology and revision of beliefs and mandates of aspects involving traditional teaching will increasingly focus on education without borders or levels (as it is fragmented by academic years training), but in other more critical that contribute to meaning in life.

2 Responses to THERE IS LIFE AFTER PRINTING